I don’t know anyone who isn’t happier on a sailing boat.

We raced down to the marina to begin our journey towards Halong Bay.

I don’t think I need to explain why. (Brace yourself for views that will make you head over to SkyScanner.com. My bad!). 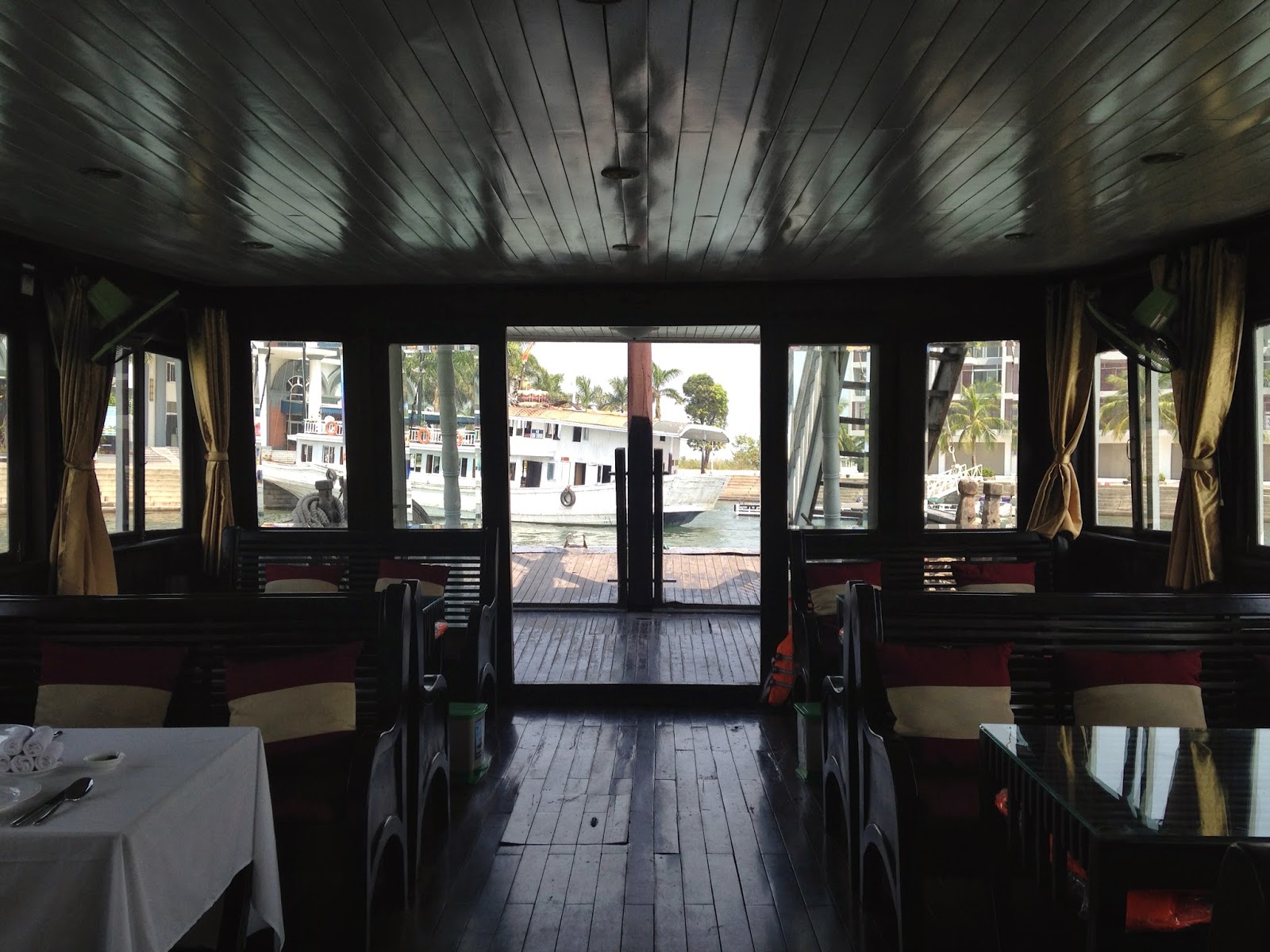 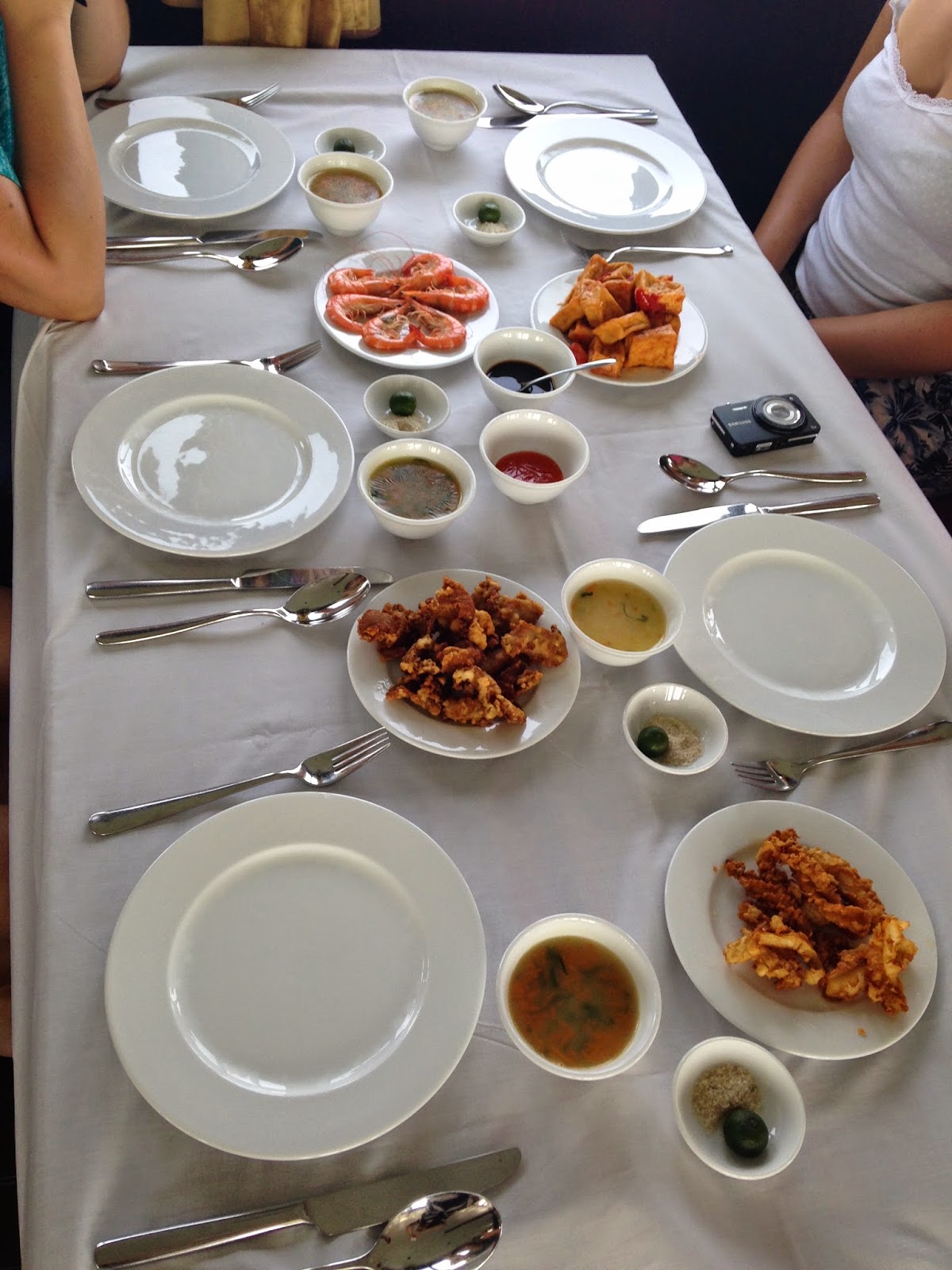 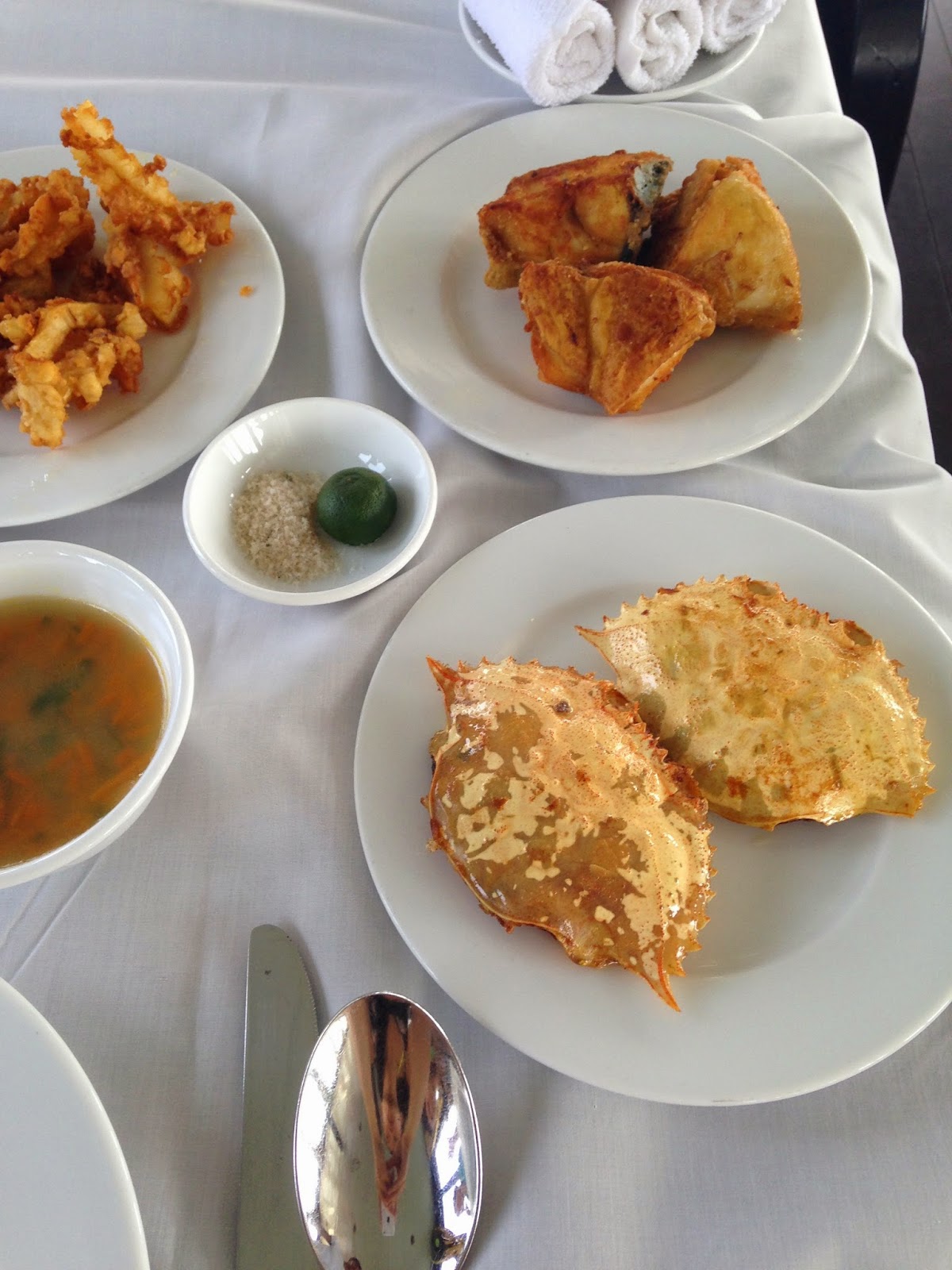 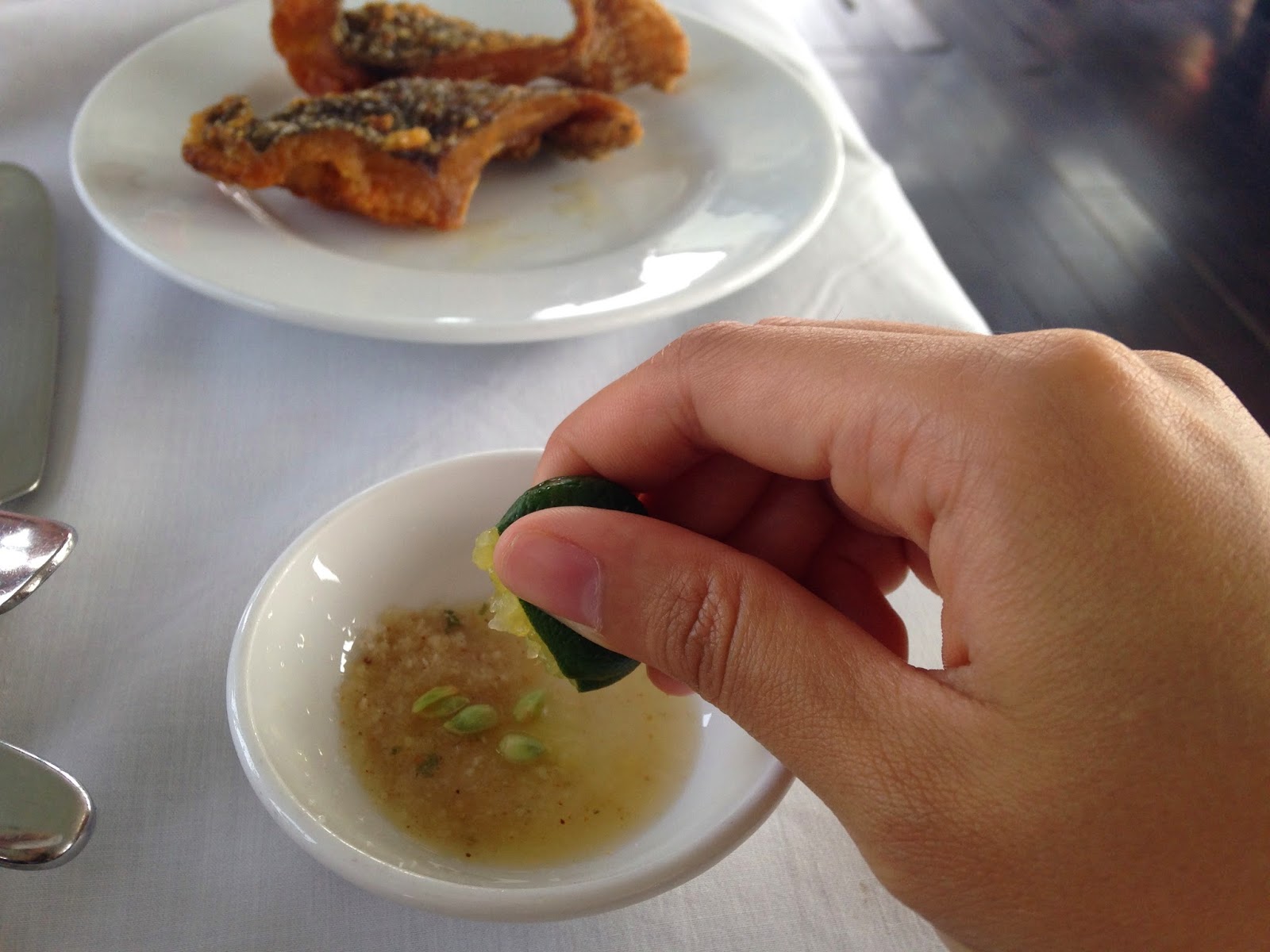 It’s not every day that a local family cooks a fresh seafood banquet for you on a private boat.

The Vietnamese eat seafood with a blend of salt, pepper, chilli and lime. A bit like wasabi mixed with soy sauce for sushi. It adds that extra kick to your dish.

Let the lime see the fish!

They kept stocking us up with noodles, chicken and spring rolls. They knew I was coming. 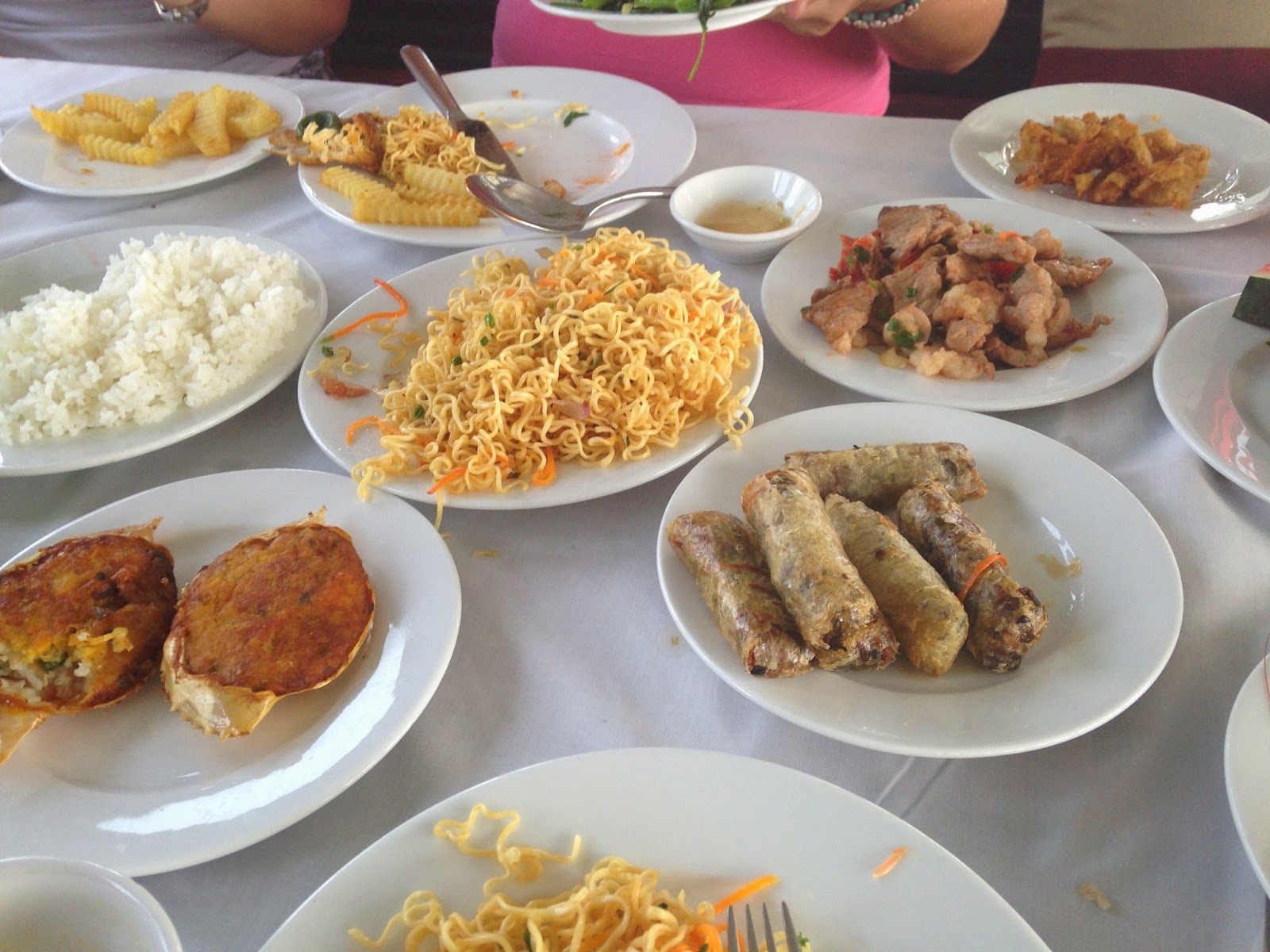 After dinner, I couldn’t resist a snap with those kinds of views behind me. 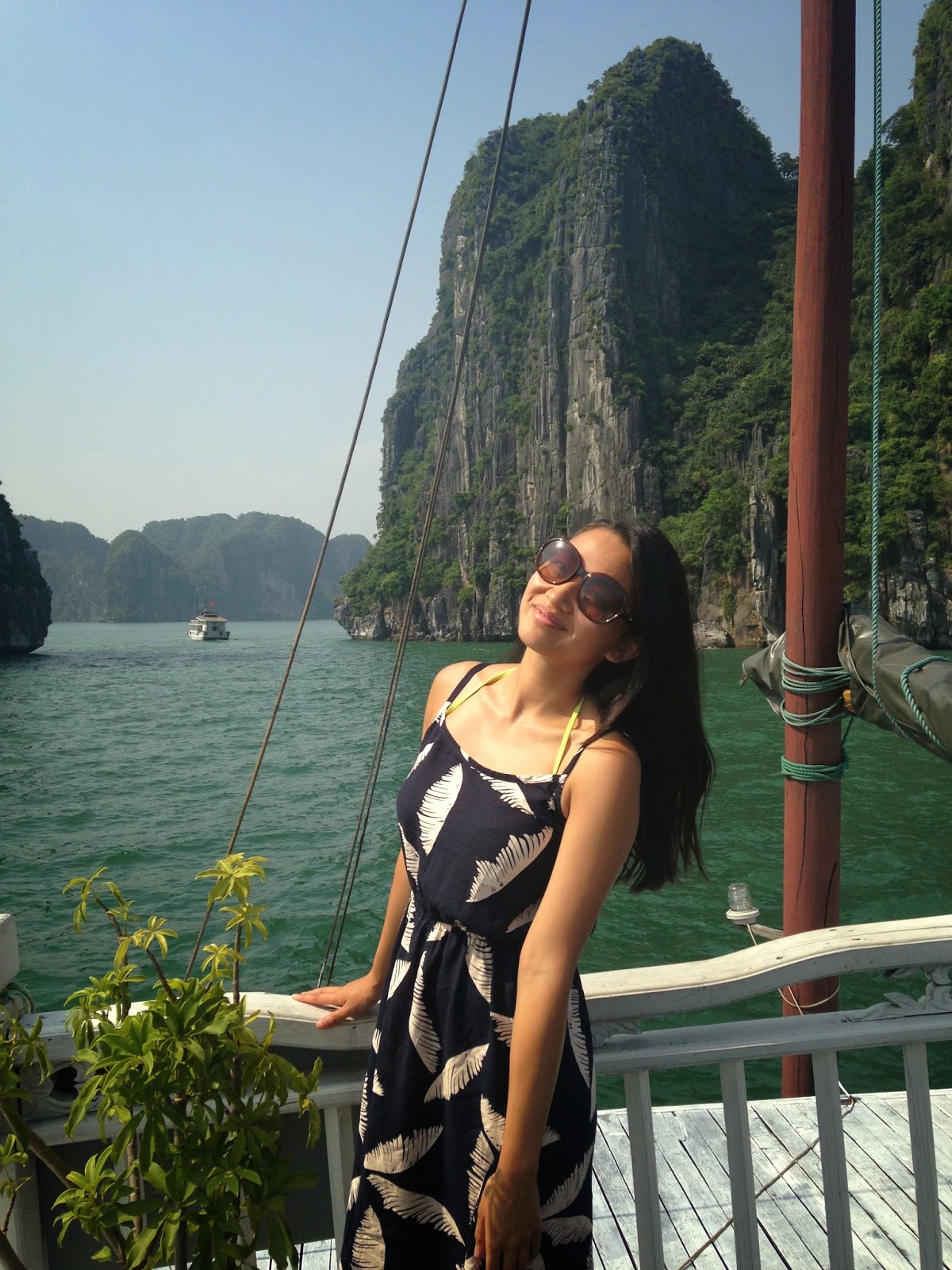 This is Halong Bay. The land of thousands of giant limestones.

Through the mist, it captures a scene from a painting and it’s hard to separate art from reality. 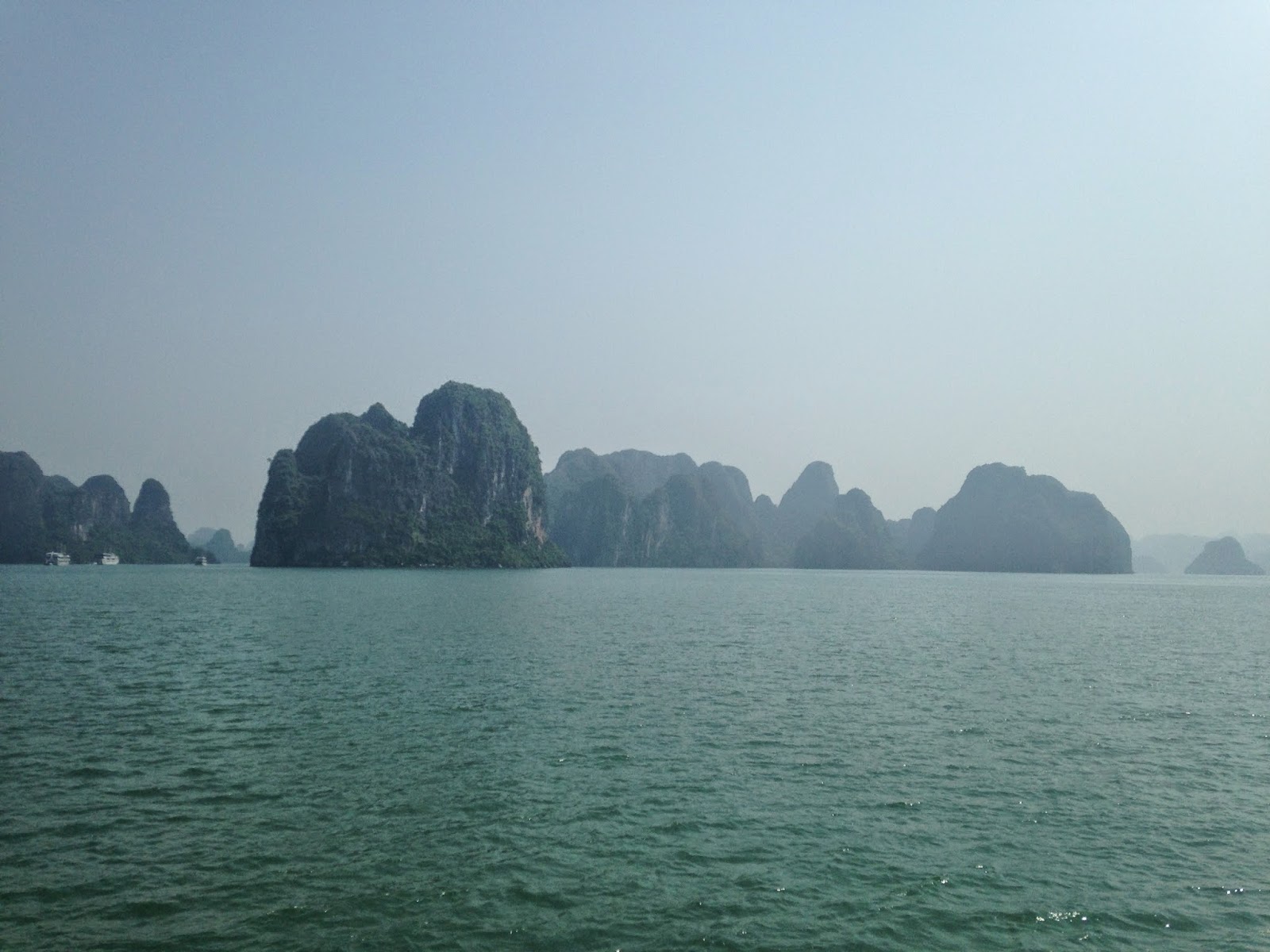 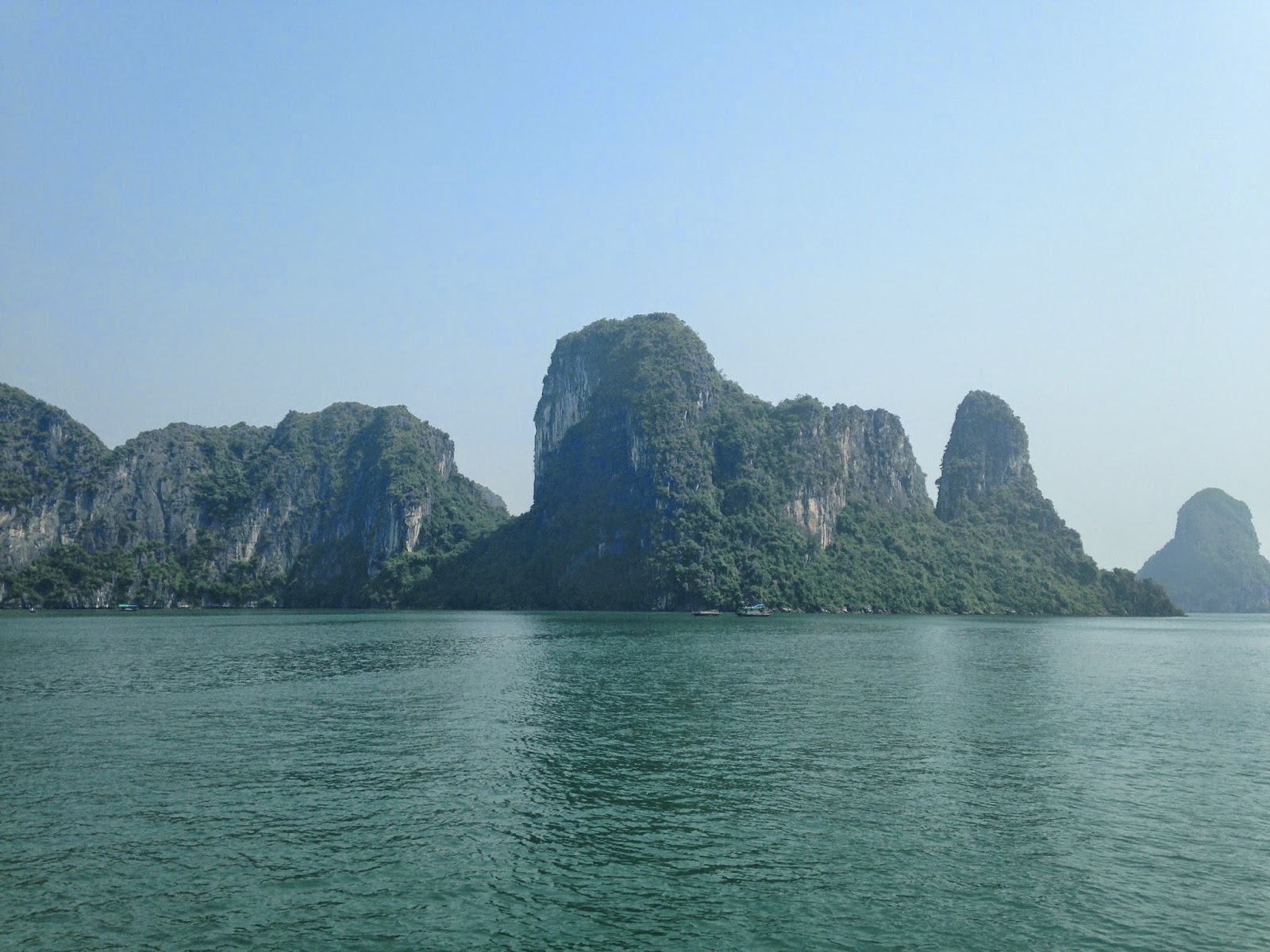 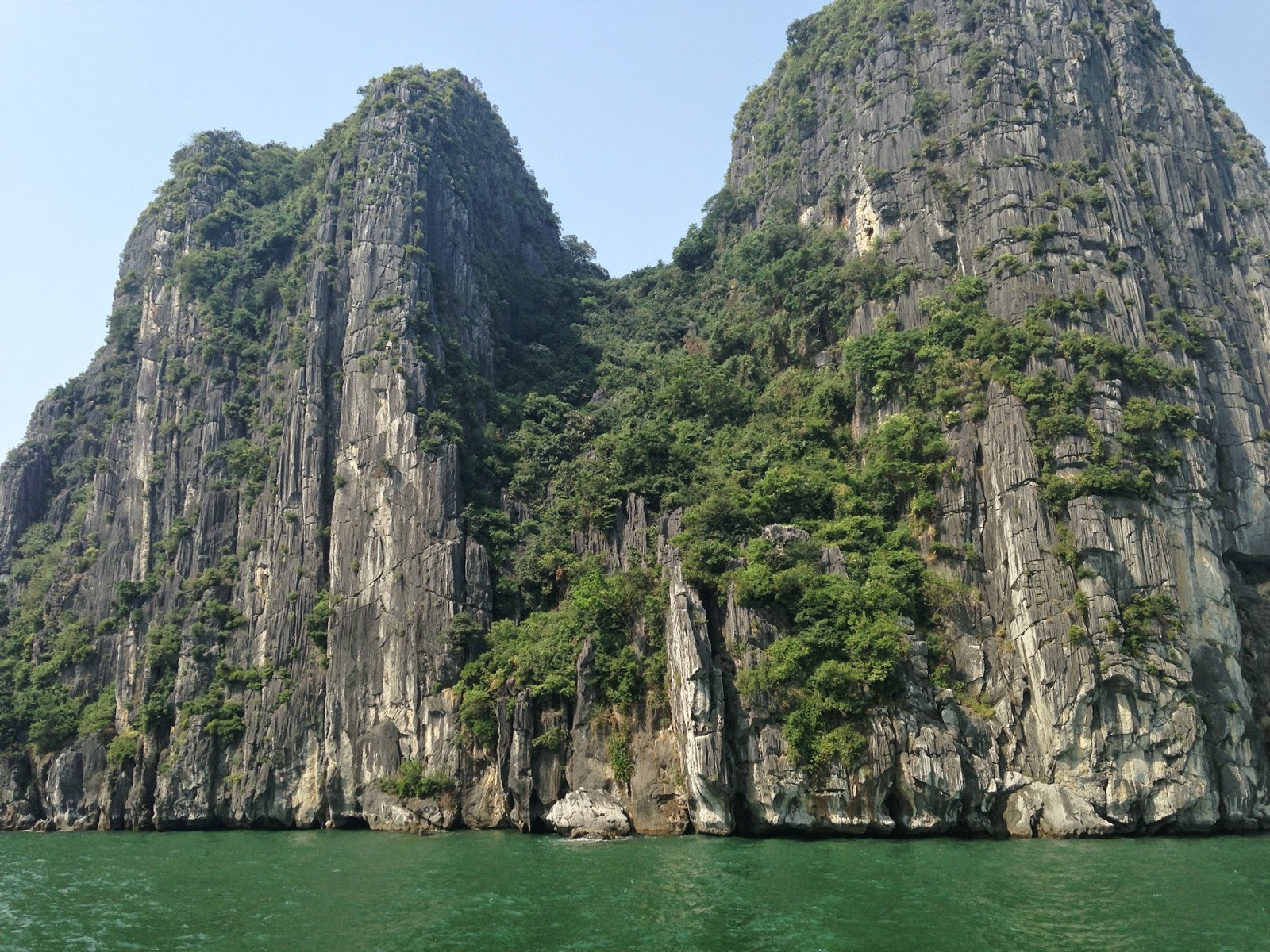 The pictures don’t even do it justice.

We hopped into the Fisherman’s village where we hopped onto a smaller boat so we could waive our way in between rocks and admire its beauty up close and personal. 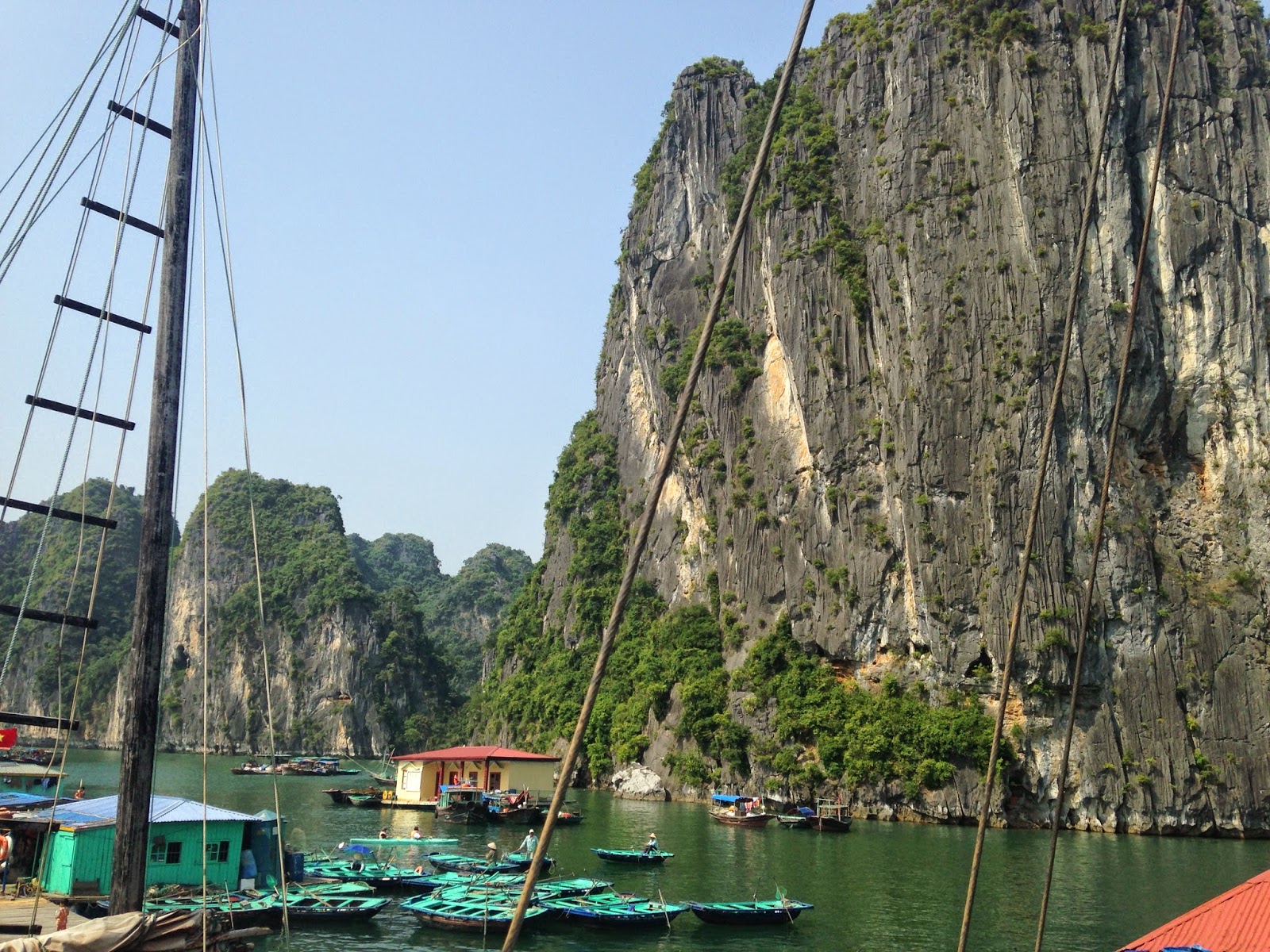 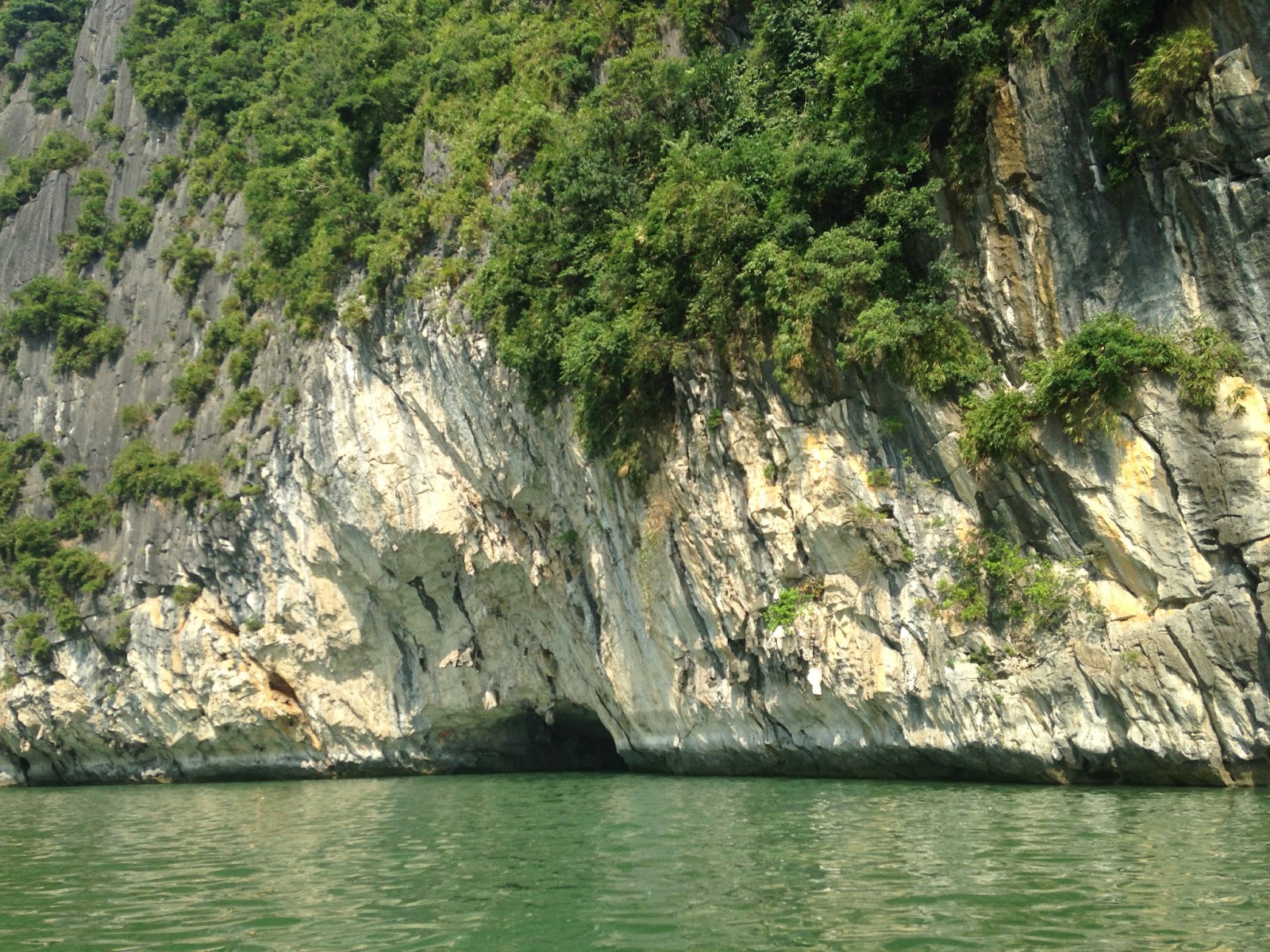 How beautiful are these crystal caves? 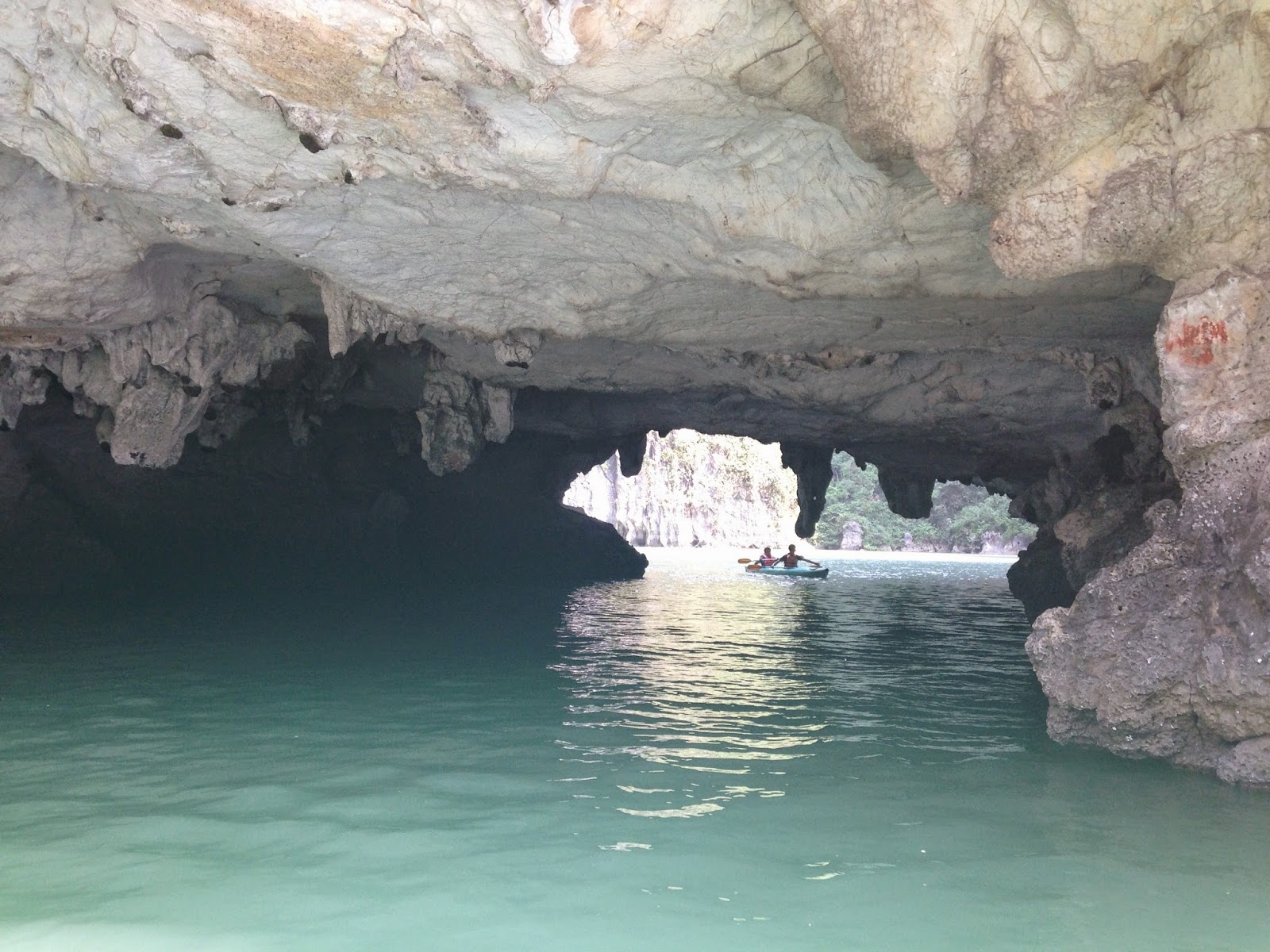 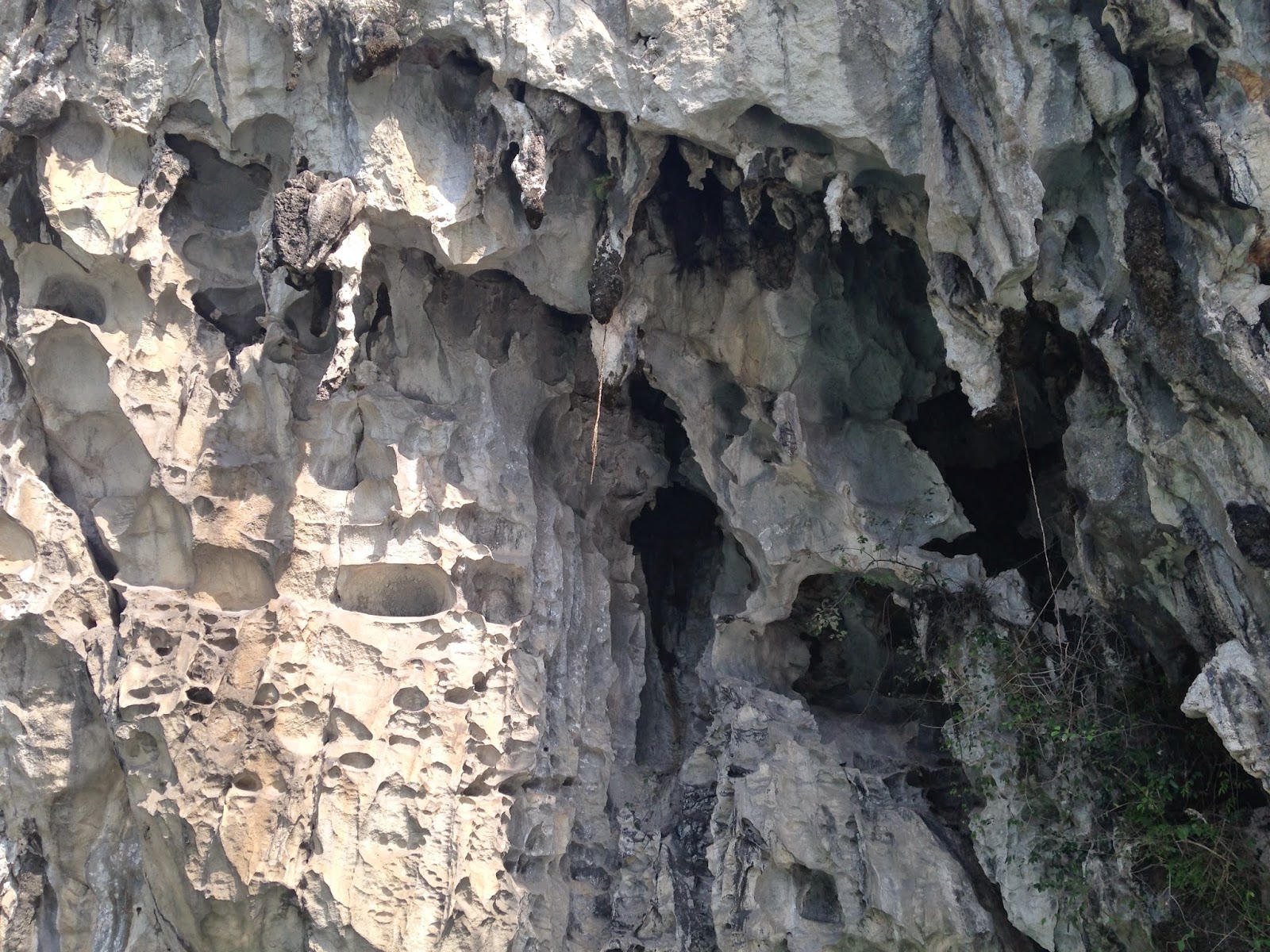 We climbed on board, and our tour guide (who spoke very basic English) gave us a brief overview of the bay. He starts waving his arms to tell us something.

“Meow, meow, look”. He points towards the rock.

(We were so confused as to what he was trying to say.) “Cat, meow, meow”. Then Emily said, “Oh, he’s trying to tell us that the sculpted rock is in the shape of a cat!”.

It totally does, don’t you think? 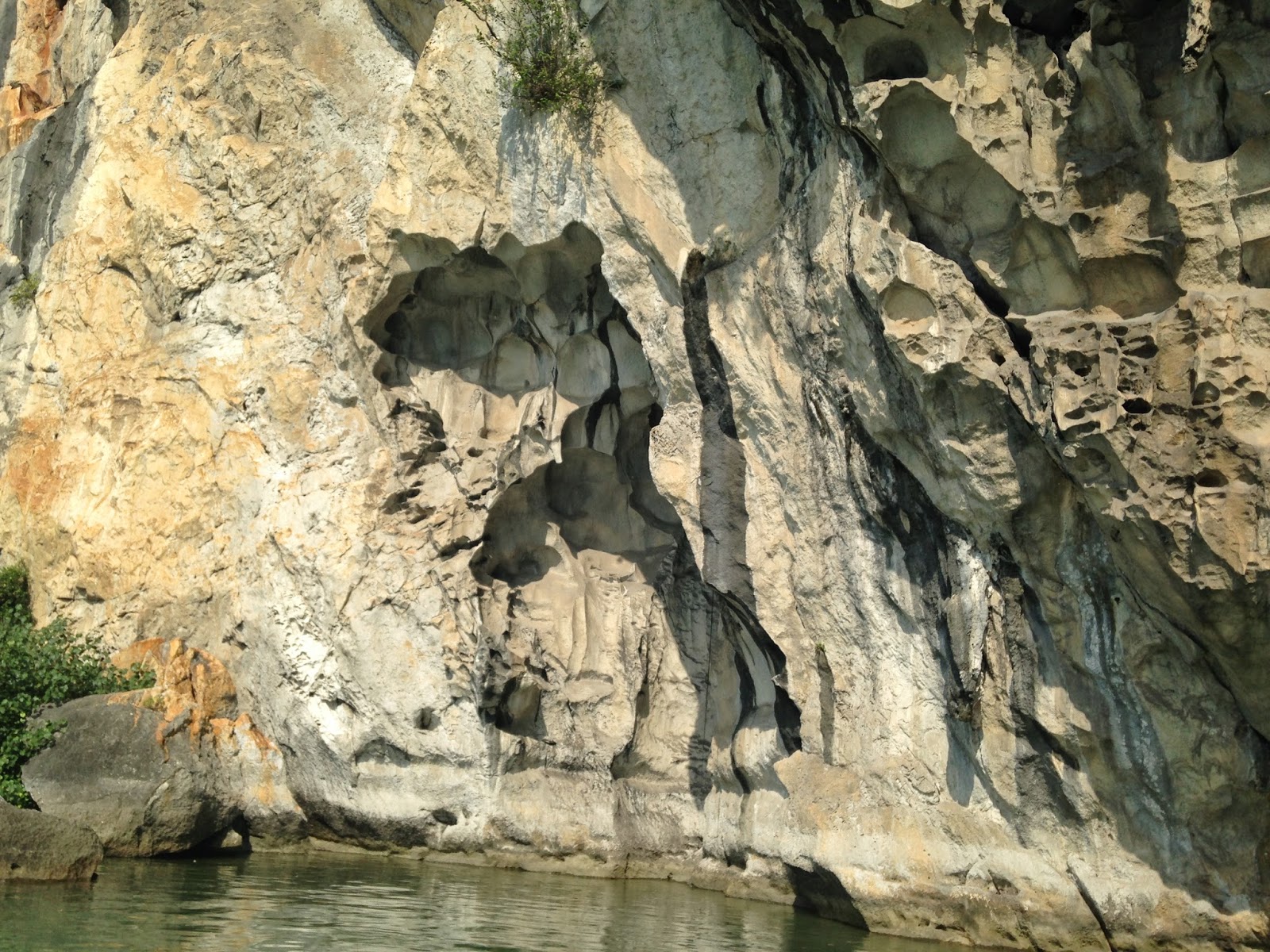 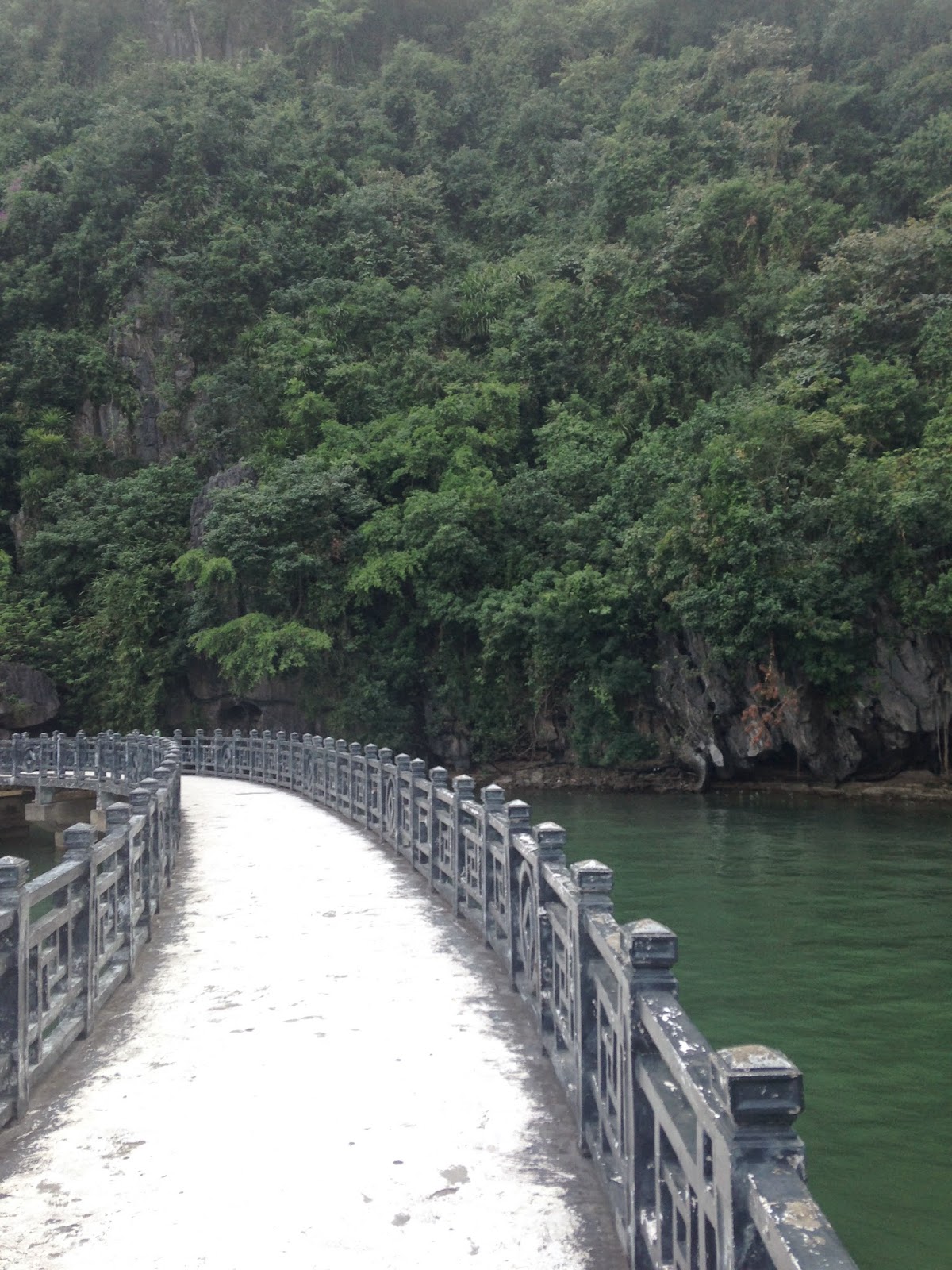 Welcome to the ‘Colourful Cave’. In Vietnamese, it’s called ‘Dong Thien Cung’. (I can’t help snigger at the name Dong). 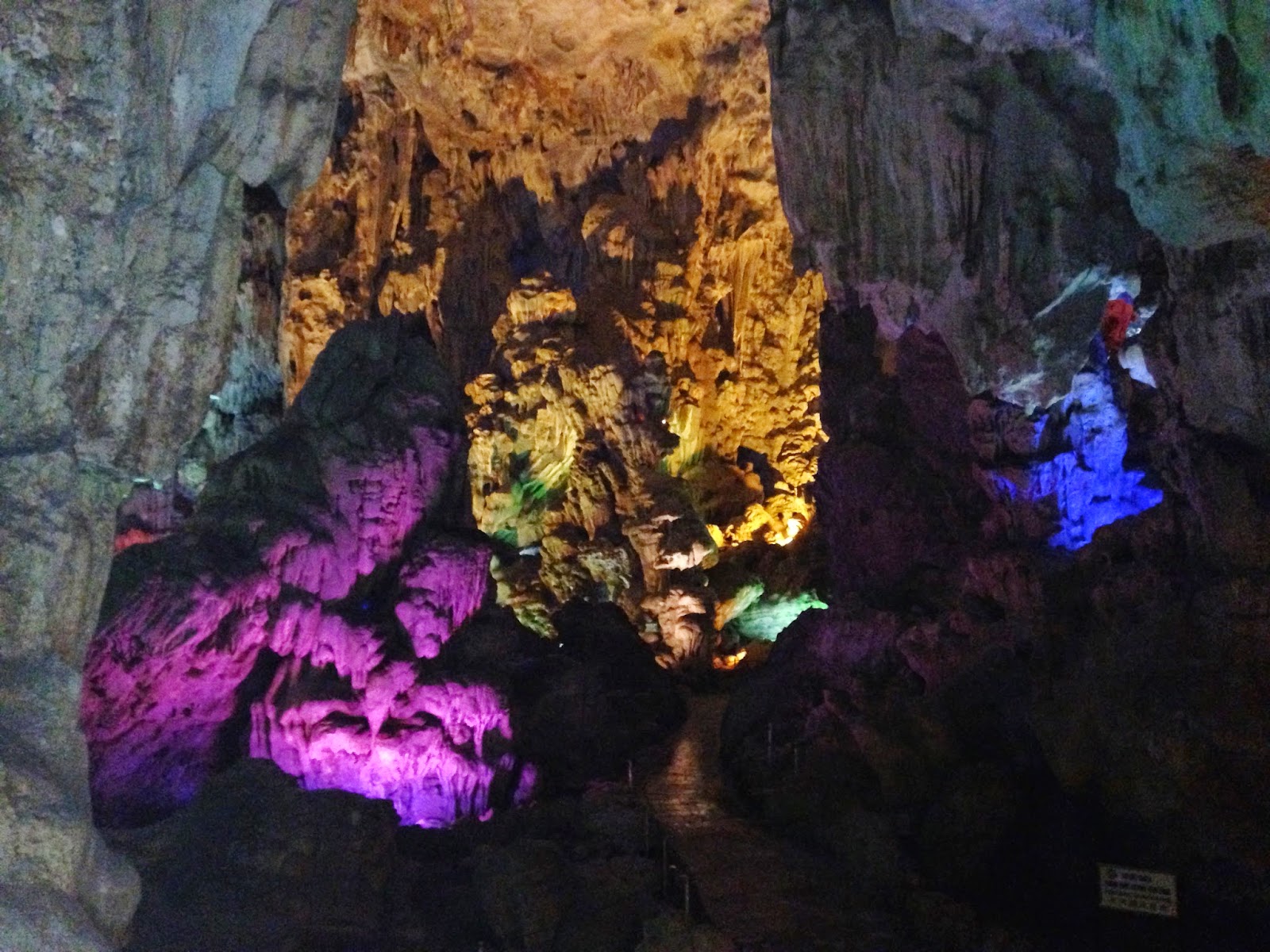 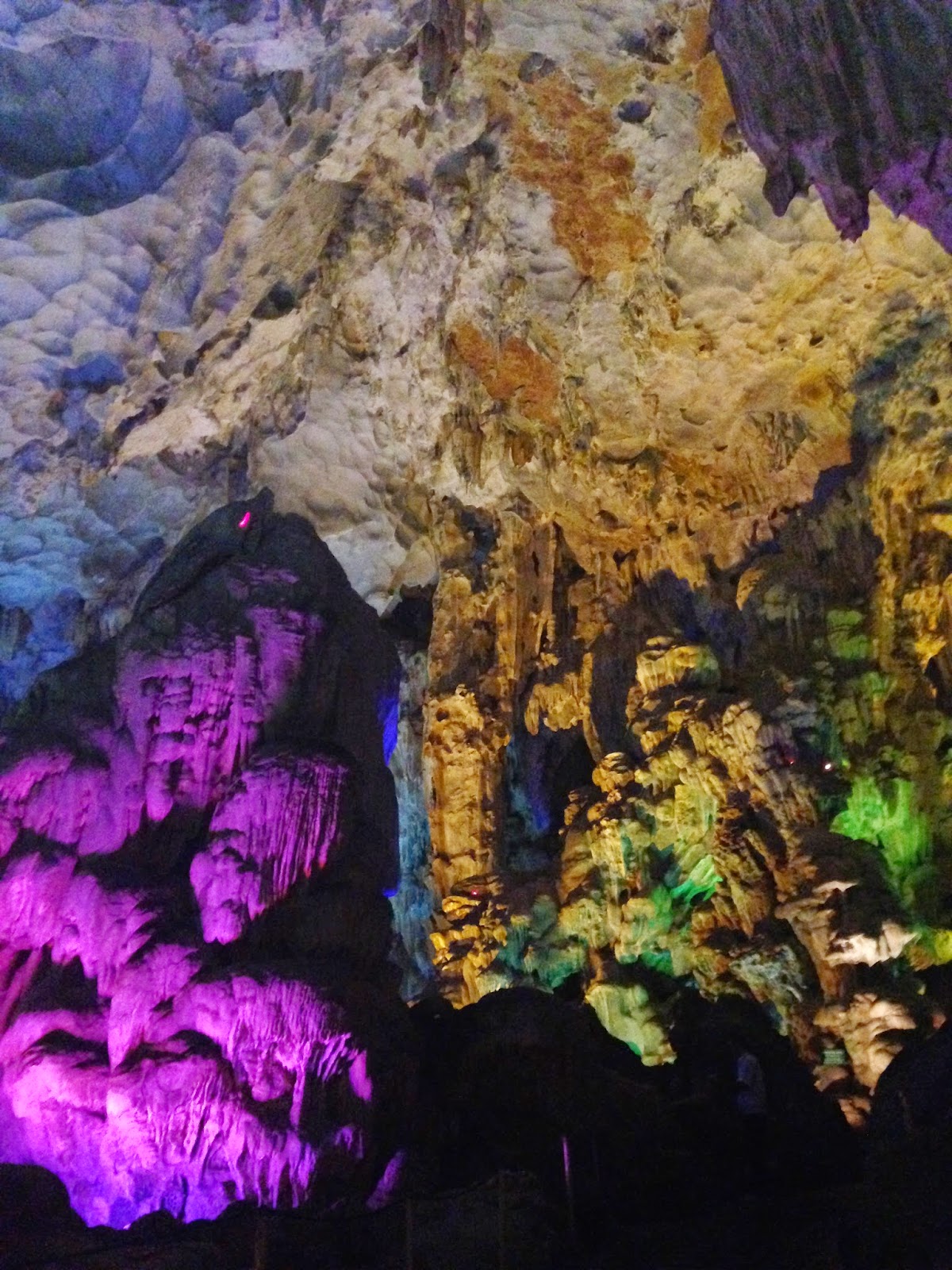 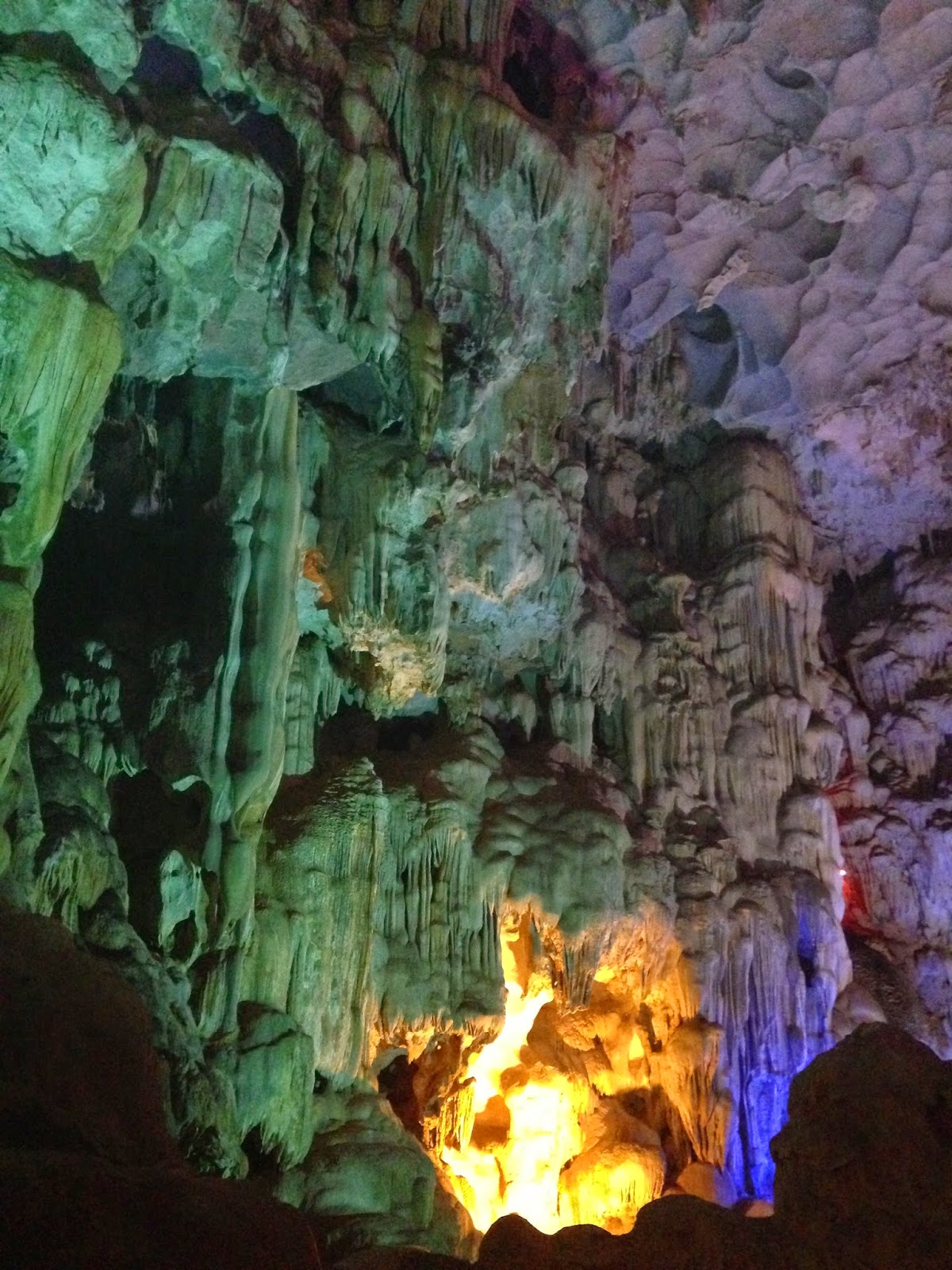 I swear there is something in the air of this cave because we were in a state of giggles throughout the whole tour. I’ll tell you why. The tour went something like this:

The tour guide whips his laser torch thing out.

Us (amongst ourselves): “Is he just saying these rocks look like any animal he can think of?”.

Him: “Look at this rock, what do you think it looks like?”

At the same time, we all burst out laughing, you know when you laugh so hard you can’t breathe? Some of us couldn’t get up or look at him in the eye.

Him: “Hahaha!” (He definitely thought we were weirdos).

Then after that, all we saw were boobs and willy shaped rocks and we couldn’t stop laughing every time he said, “Look at this rock, what do you think it looks like?”.

Then when he said, “It looks bigger than mine!”.

That’s it, we had enough, we needed to get out of there because we couldn’t handle our own giggling. 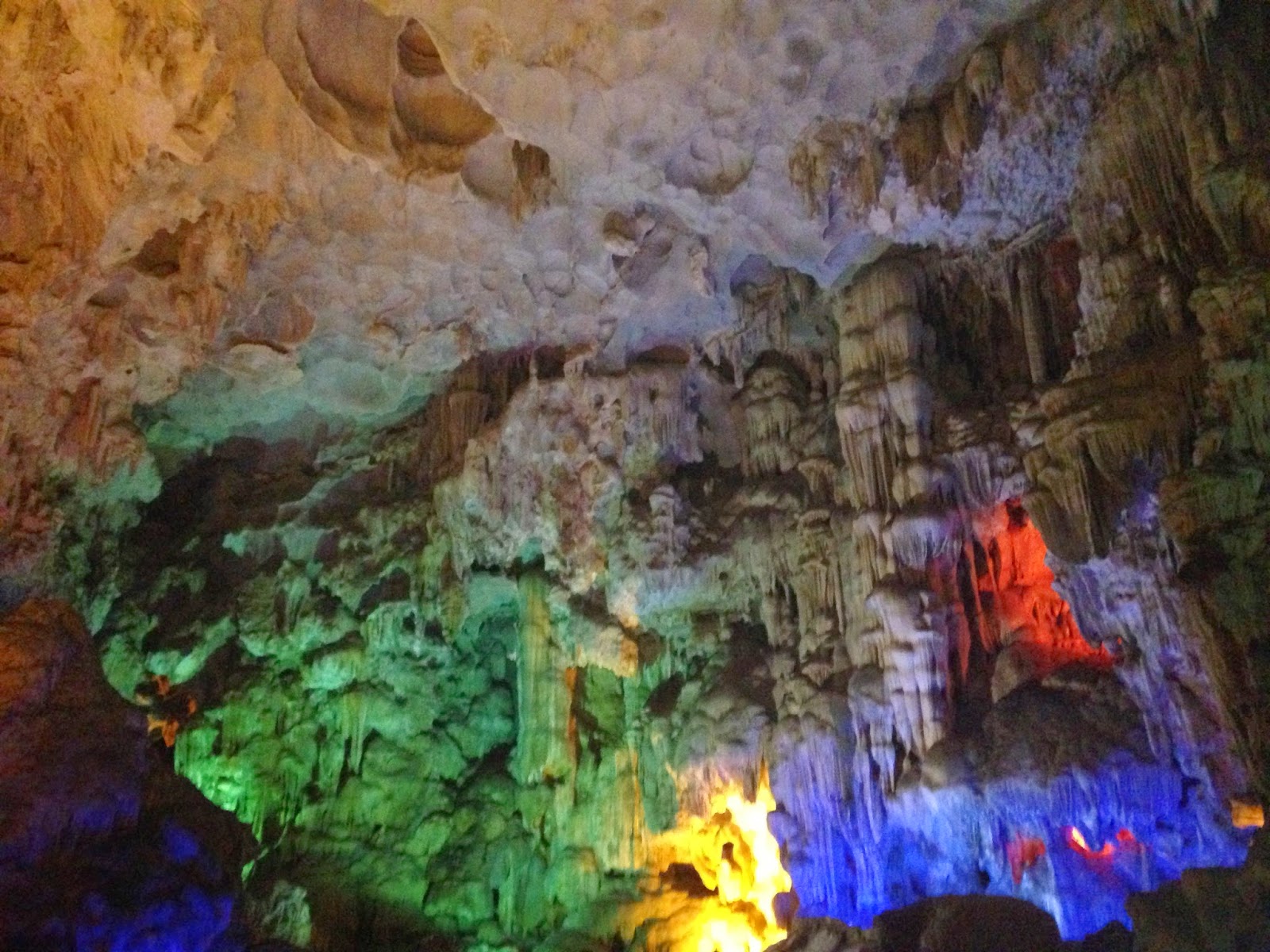 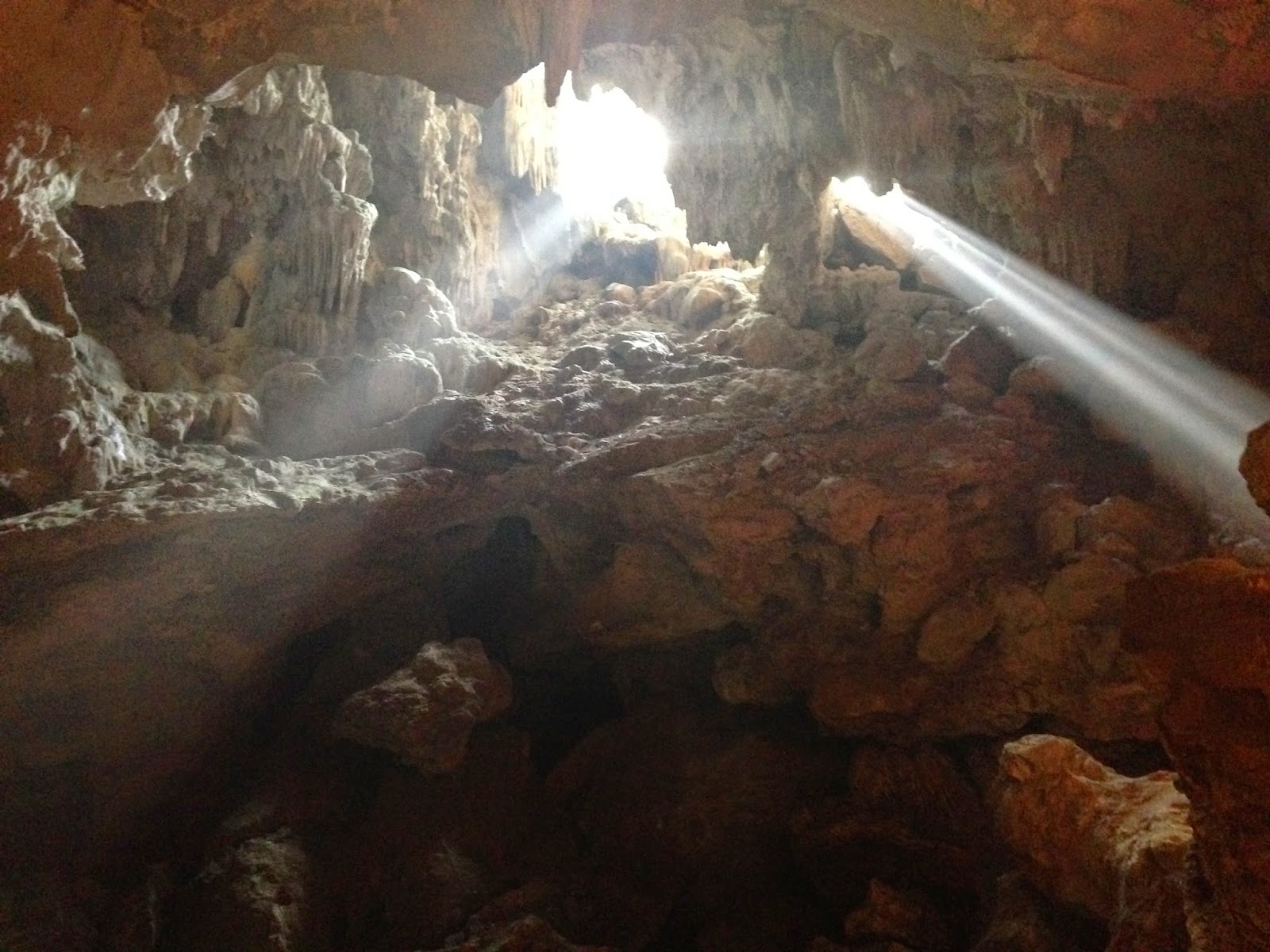 I was enLIGHTened. Hehehe.

Top tip: don’t forget to bring a cardigan / jacket inside, I oversaw my outfit. It’s cold, damp and very cavelike in there, obviously.

We were then taken to the Pearl Oyster factory.

Legend has it that the hundreds of islands in Halong Bay were formed by a dragon which spat jewels across the water.

Fun fact: did you know that it takes at least five years before an oyster becomes mature enough to produce a pearl, and the success rate is about 40%? Ooooh.

We were taken to a very interesting demonstration of how they grow and extract the pearls from fishing to production. 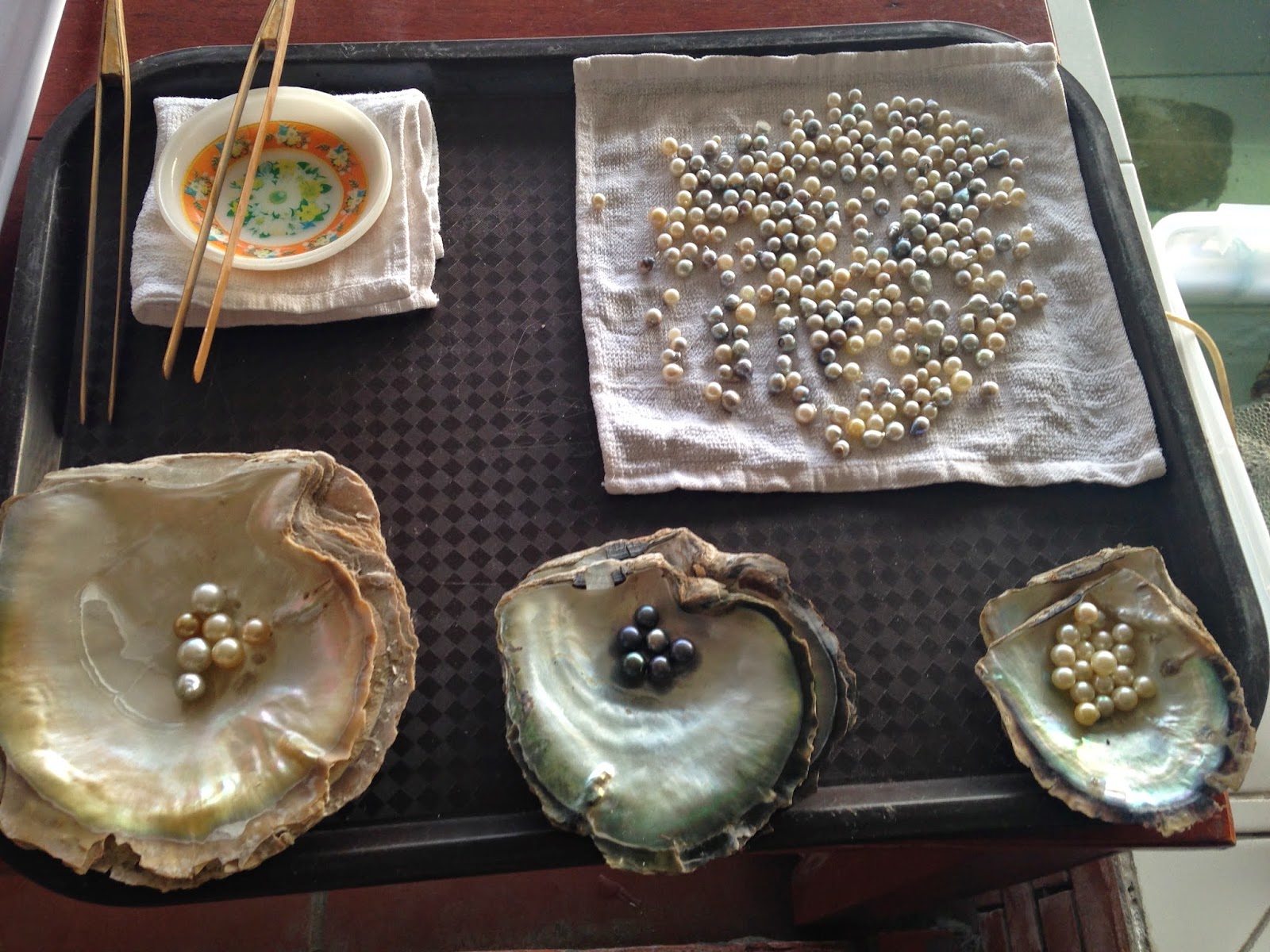 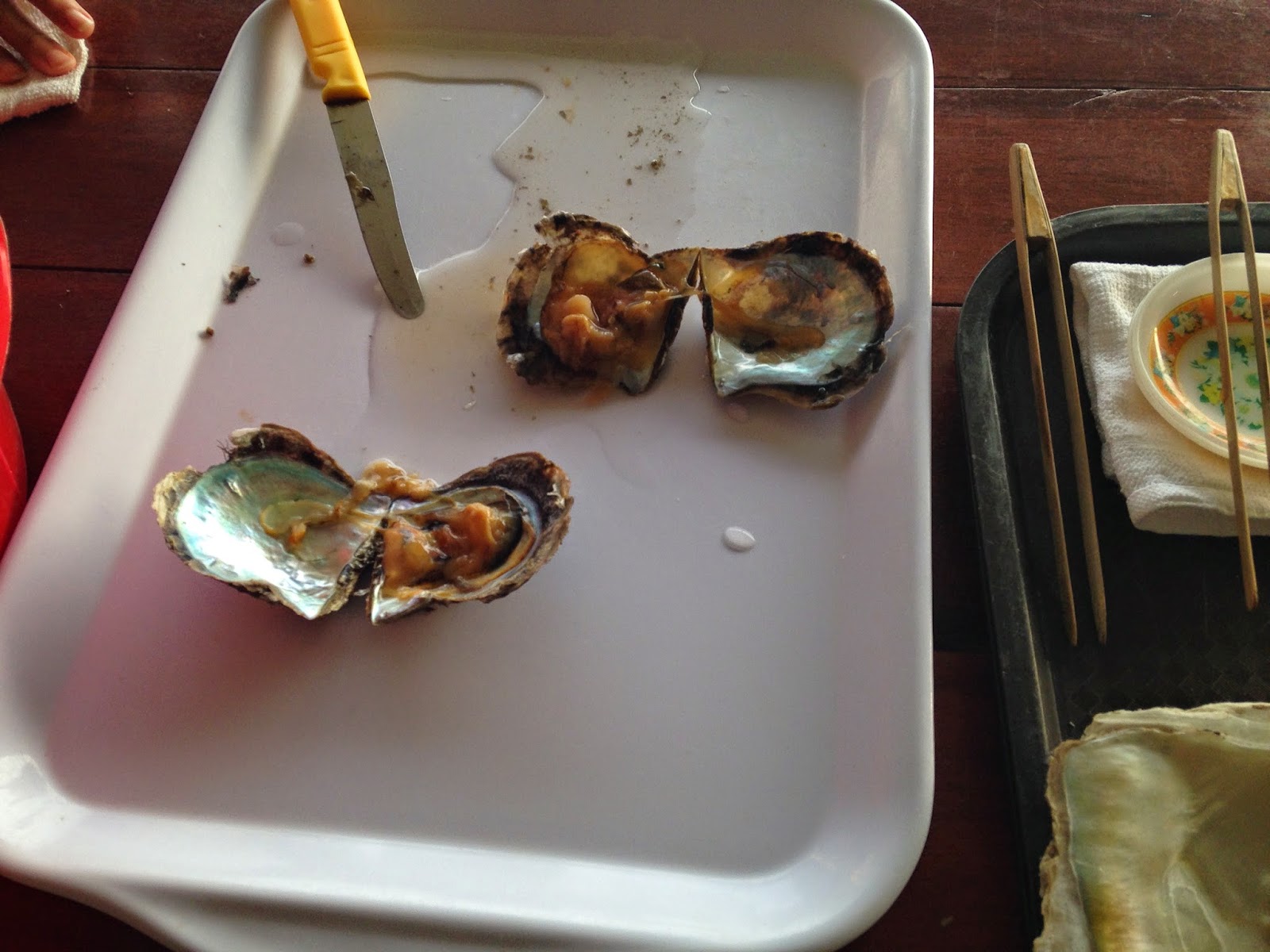 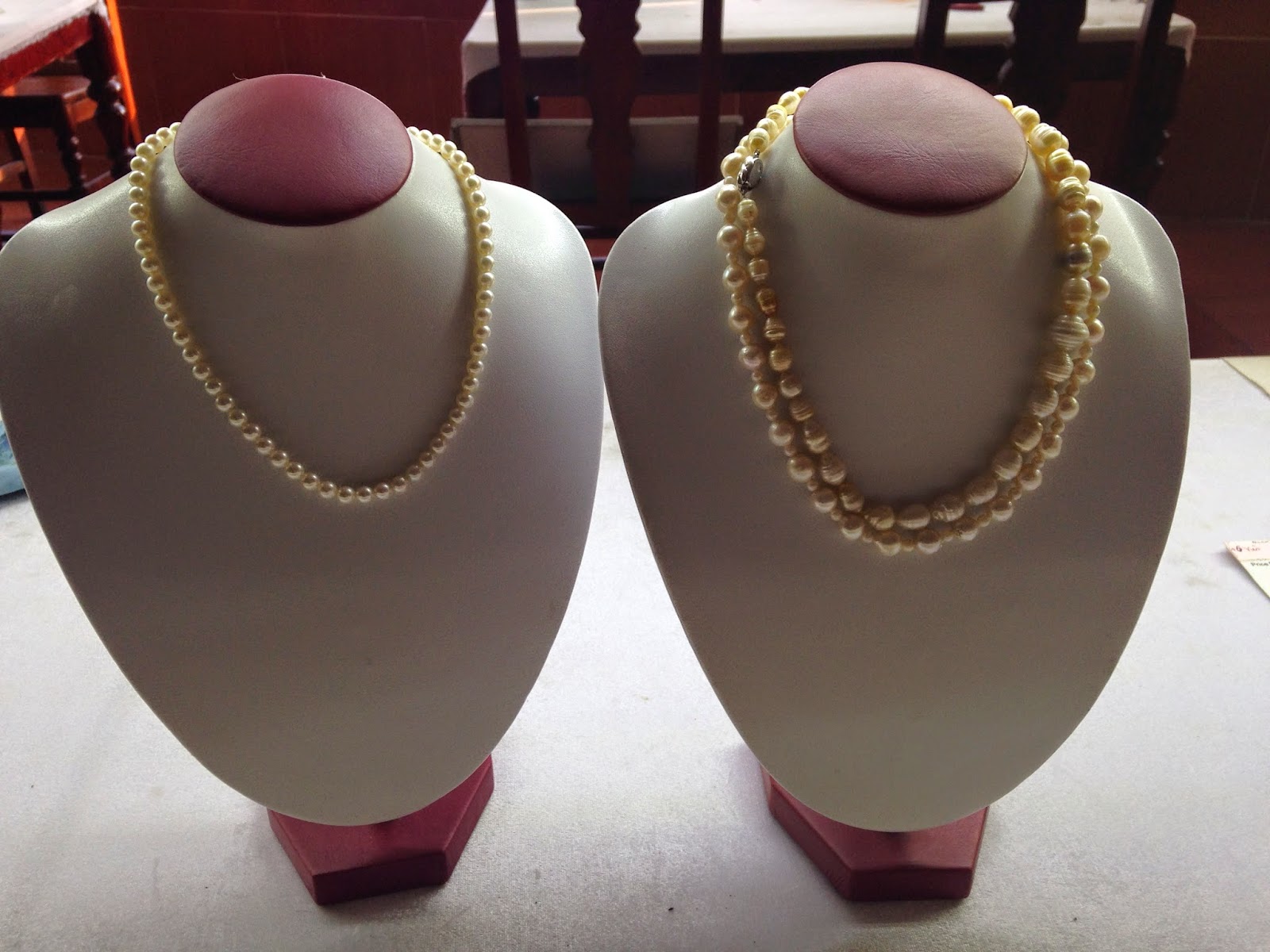 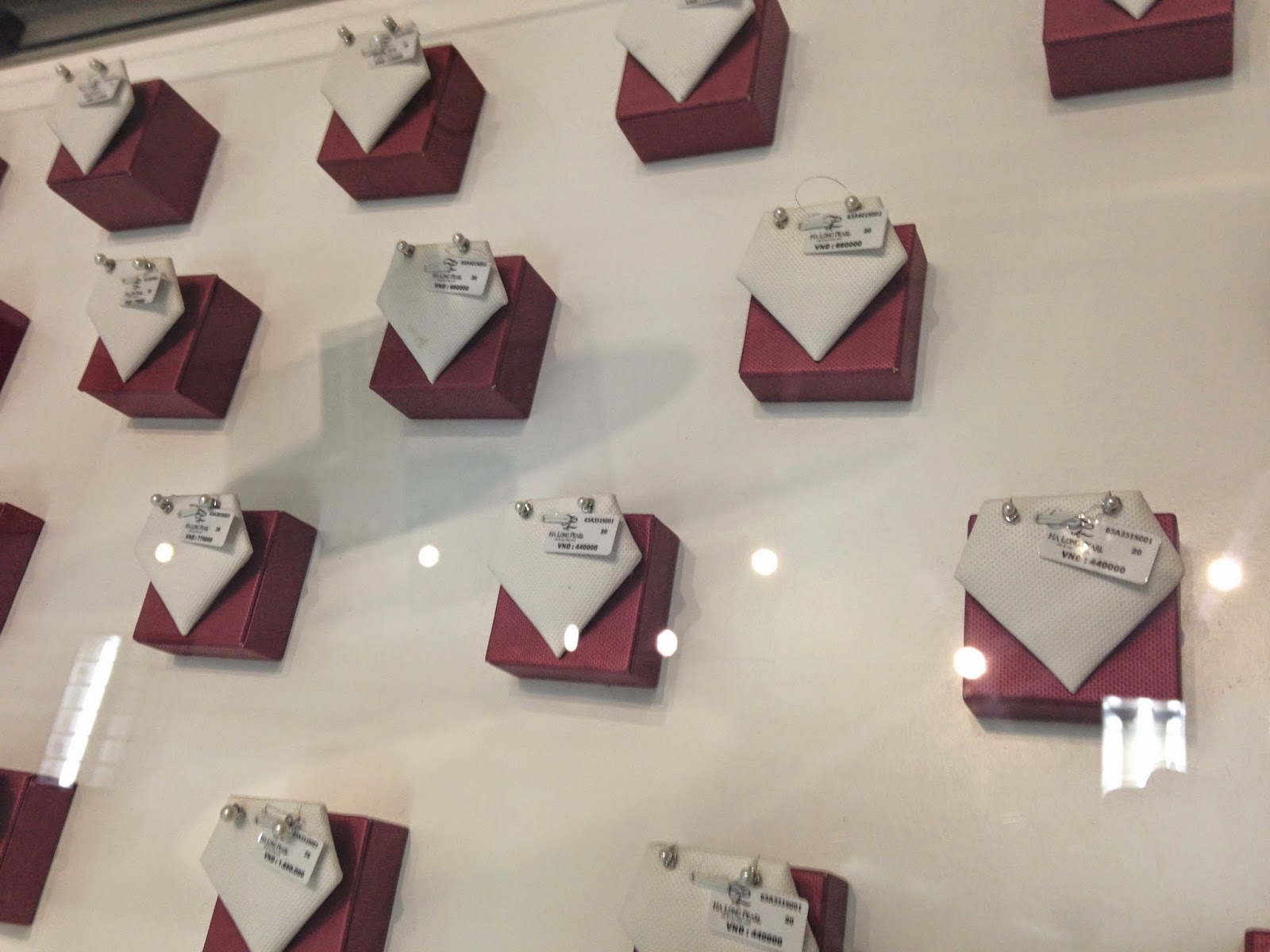 Conveniently they have a pearl jewellery shop next door which looked like a department store.

I brought my mum some Pearl Oyster cream. They say pearl extracts are good for the skin.

Have a browse of some of the pearl creams sold on our doorstep below.